Monroe County Health Department celebrates its 100 year anniversary on July 1st. On July 1st, 1921 Ann Eichenberger of Lindsey was hired as the first Monroe “county nurse”.  The county board, according to documented proceedings of November 20, 1920, provided her with a new Ford coupe (with an extra tire and license plates), set of scales, card index cabinet, and supplies.  Her assignments included checking the sick and quarantining people in their homes if a communicable disease was detected or suspected.  Most antibiotics and immunizations had not yet been discovered.  The “county nurse” was also charged with identifying children with debilitating conditions and arranging for state-supported treatment.  The Shepherd-Tower Act of 1921 provided grants to develop Maternal Child Health programs, creating a demand for public health.

Public health nursing began in the 19th century when Lillian Wald established the first official district nursing agency in the United States at the Henry Street Settlement House in New York City in 1893. The first mention of public health nursing in Wisconsin history occurred in 1903.

In 1974, MCHD became the first licensed and Medicare-certified home care agency through the Home Care program, which provided skilled nursing care to county residents under the direction of their physicians. That program lasted for 35 years until it ended in 2009.

In 1979, Monroe County adopted the Special Supplemental Nutrition Program for Women, Infants, and Children (WIC), which was a tri-county program between Monroe, Vernon and Juneau Counties. At the time, WIC staff traveled to multiple locations within each county to provide services. Today, each county has their own program.

Other programs that the department had over time included health check (a health assessment program for children on medical assistance), fluoride mouth rinses, scoliosis screenings, hearing conservation programs and vaccinations.

In 1993, the department received a national award from the federal Department of Health and Human Services to commend the county’s perinatal program, which was developed to improve the outcome of high risk pregnancies.

As we’ve seen with the COVID-19 pandemic, Health Department staff still have some of the same duties as Ms. Eichenberger, but also have new features and responsibilities as public health practice has modernized and expanded beyond solely nursing services.

To celebrate our 100 year anniversary, Monroe County Health Department will be holding a community scavenger hunt the week of July 12th-16th. As part of the scavenger hunt, MCHD will be posting signs at different locations throughout Monroe County connected to major public health achievements. Community members are invited to take a picture of these signs and submit them for entry in a drawing to win prizes. Each picture submitted will be one entry into the drawing. Pictures can be e-mailed to covid19@co.monroe.wi.us or community members can tag MCHD on Facebook @MonroeCountyHealthDept. Clues will also be provided.

Additionally, throughout July, we will be providing information to the public about public health history, achievements, programs and the future of public health.

For more information on the scavenger hunt or our 100 year campaign, visit healthymonroecowi.org/100, see our Facebook page or call Monroe County Health Department at 608-269-8666.

Public health has made significant advances over the 100 years, thanks to achievements in biomedical, epidemiological, and behavioral research and public policy.  Below, we highlight some of the major public health milestones as they relate to Monroe County.

On July 1st, 1921 Ann Eichenberger of Lindsey was hired as the first Monroe “county nurse.” Her assignments included checking the sick and quarantining people in their homes if a communicable disease was detected or suspected, and identifying children with debilitating conditions and arranging for state-supported treatment.

Vaccines have eradicated smallpox globally and polio in the U.S., and have drastically reduced measles, diphtheria, rubella, pertussis (whooping cough) and other diseases.

Vaccines protect entire populations by preventing the spread of disease from one individual to another. Monroe County Health Department has given various vaccines throughout its 100 years.

The Sparta Water Department began fluoridating the city water supply in 1951.  Fluoridation of community drinking water is a major factor responsible for the decline in dental caries (tooth decay) during the second half of the 20th century.  The history of water fluoridation is a classic example of clinical observation leading to epidemiologic investigation and community-based public health intervention.

Decrease in Tobacco Use

Research and support from epidemiologists, along with policy and taxation changes played an important role decreasing the use of tobacco since the mid-1960s.

The Tobacco Compliance Program was introduced in Monroe County to ensure tobacco retailers comply with the Federal Synar regulation which requires states to maintain a youth access to tobacco rate of less than 20% by focusing on positive reinforcement protocol to support retailers who “do the right thing” and refuse to sell tobacco to minors.

Decrease in Death from Heart Disease

Although, heart disease remains one of the leading causes of death in Monroe County, Public health policies and education on nutrition, promotion of physical activity, and advances in medical technology have contributed to an over 50% reduction in cardiovascular disease-related deaths in Monroe County since 1980.

Improvements in motor-vehicle safety have resulted from engineering efforts to make both vehicles and highways safer and from successful educational efforts to change personal behavior (for example, increased use of safety belts, child safety seats, and motorcycle helmets and decreased drinking and driving), contributing to large reductions in motor-vehicle-related deaths.

Beginning in the 1970s, programs such as The Special Supplemental Nutrition Program for Women, Infants, and Children (WIC) were created to offer nutrition education, breastfeeding education and support, supplemental nutritious foods, and connections to other community services in response to the growing concern over the health impacts of malnutrition on families living in poverty from doctors, researchers, public health and anti-poverty advocates.

A focus on providing resources and education to families in the early stages of parenthood has helped to improve maternal and child health. MCHD nurses recommend resources during postpartum or newborn home visits such as parenting classes, behavioral observation techniques, and opportunities for parents to connect with each other in community, which allows growing families to reach the appropriate milestones through the stages of life.

Public health staff work to control various communicable diseases by providing education, conducting interviews with patients to determine the source of infection, and giving vaccinations. Controlling communicable diseases benefits the public by reducing the spread of an illness and keeping people healthy.  During the COVID-19 pandemic – it has helped keep more people out of the hospital and keep outbreaks to a minimum.

Public Health plays an integral role in pandemic response by providing recommendations to mitigate transmission of the virus, rapid testing, contact tracing for disease investigation, and vaccinations.  Seventeen contact tracers and over 30 volunteers have assisted MCHD staff in the pandemic response.

For more information on these public health milestones and our 100 year celebration, visit healthymonroecowi.org/100, see our Facebook page or call Monroe County Health Department at 608-269-8666.

The Future of Public Health

Thank you for celebrating our 100th anniversary with us during the month of July.

The Monroe County Health Department appreciates your support over the past 100 years and looks forward to serving the community for many more to come.

Public health plays a significant role in improving the safety and well-being of our community.  Over the past 100 years, public health in Monroe County has seen many changes and advancements, and we continue to see innovation in the field as the look toward the future.

A few of the major focus areas that will need continued attention in the coming years include:

Public health professionals will lead the charge in addressing food deserts (communities where access to health food is scarce), making nutritious food more affordable, and educating the public on health lifestyle choices.  Each of these measures will contribute to the overall health of our communities.

Public health professionals are discovering new ways to predict infectious disease outbreaks and contain them before they strike hard, thanks to the rise of big data and its analysis.  Data scientists in the public sector are beginning to leverage smart algorithms and predictive modeling to keep communities at risk of contagions safe and healthy. 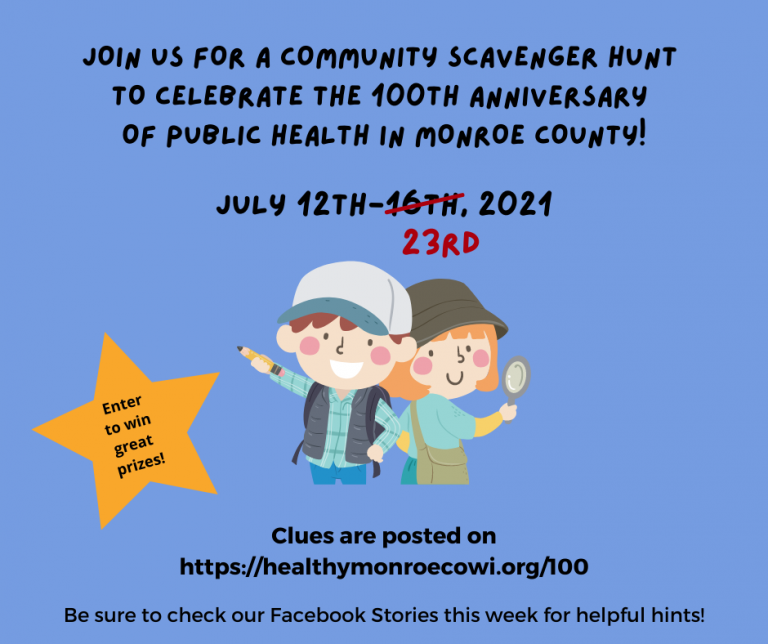 To celebrate our anniversary, we are providing information on the top public health accomplishments over the last century and connecting them to local history.

Join us in our celebration by participating in our community scavenger hunt July 12th-23rd.

Here’s how to play:

Winners will be notified on Monday, July 26th.